Secret Nation review: insight into the invisible Armenians in Turkey 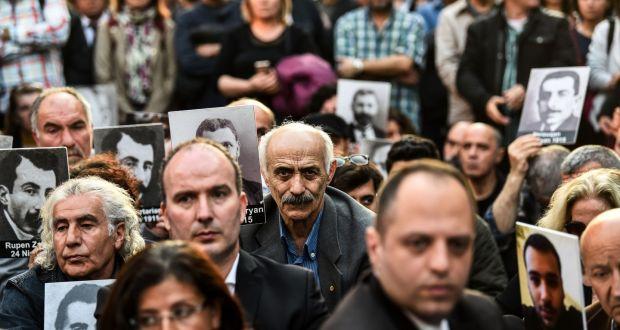 WESTERN ARMENIA – If you’ve ever visited Turkey, you will have encountered people you assumed were Turkish but who could well have been Armenian. Avedis Hadjian, author of Secret Nation: The Hidden Armenians of Turkey, spent three years travelling round eastern Turkey, the historic Armenian homeland, meeting those mountain people who keep a low profile in a country accused of murdering or deporting about 1½ million of their people.

The account of these horrendous times is littered with euphemisms such as “forced migration” or “forcibly minoritised”. Though always denied by Turkey, the word soykurum – Turkish for genocide – encompasses the whole sorry story.

Hadjian is part of that story. A journalist, born in Aleppo and educated in Buenos Aires and Cambridge, he bears an Armenian family name and, of vital importance, speaks Hamshetsnak, the almost-forgotten dialect of western Armenia which is now part of Turkey. During his travels, he seeks out people in the villages and towns of that most mountainous part of Turkey, chatting with anyone who will talk to him.

Generally, he is welcomed courteously, guided along perilously steep mountain paths, offered lifts from one village to the next often with someone phoning ahead to introduce him. But nearly always there is the denial: No, we’re not Armenian. We are Turkish and we are Muslim. But your name, Hadjian will say having done his research, is Armenian. At this they shake their heads. Maybe many years ago but not now. Some see him as stirring up trouble for them and on one occasion are angry enough for him to beat a hasty retreat.

But why the denial? One explanation is that after the defeat of the Ottomans and their 300 years of Sunni rule, people wanted a united Turkey, some wanting it at any price. Turkey for the Turks was the call. Villagers tell Hadjian stories their grandparents told them of Armenian villages laid bare, of Armenians hunted, hounded and pushed off bridges into the Euphrates or dying during forced marches across the Syrian desert. (In eastern Syria, in the Armenian church in Raqqa, I saw pictures of Armenian women against whom the most evil of sexual crimes had been committed.)

Some Armenians, hoping to pass as Turkish, survived by adopting Islam, freely or otherwise, the latter process known as Islamicisation. Coincidentally, Hadjian introduces us to a bus driver who explains the policy by holding up his index finger: one country, one flag, one language. No room for minorities there.
When survival is paramount, the denial of their origins by some Armenians is understandable though Hadjian is puzzled by the reaction of people to whom he has shown documents proving they are Armenian. Many respond with amazement, wanting to know more about their supposed Turkish origins or their suggested Armenian background. And despite the evidence, they maintain that though they may indeed be Armenian they remain Muslim even though before going to the mosque to have Iftar they might deviate to the Armenian Orthodox Church to light a candle or two.

Some Armenians actually designated themselves Turkish – which meant remaining silent about the genocide – because they invested their hopes in Kemal Ataturk and his post-Ottoman dream of a united secular Turkey.

Though teetering towards information overload – so many villages, so many people – this doorstop of a book gives us a fascinating if challenging account of present-day mountain life in Turkey: the annual tea harvesting done by the whole family, sheep herding, hoeing in the shadow of Mount Ararat. There’s the big family meal and the get-together which ends in fisticuffs. As the Persian saying goes: “They hate each other like cousins.”

Whatever you say, say nothing is the order of the day. Armenians distrust the Kurds, suspecting they collaborated with Turks to carry out the 1915 genocide. The Turks see the Christian Armenians as infidels and the Christian Armenians denigrate those Armenians who became Muslim. Distrust casts a shadow over everything. Occasionally, however, Hadjian shines a light into the darkness when Vartan tells his story. Vartan’s Armenian father, orphaned when his family was murdered, was taken in by a kindly Turkish family who brought the child up as a Muslim. Vartan was 25 before he learned he was actually Armenian. But, married to a Kurd, their children Muslim, he lives in a desolate place not of his making: “I feel alone and cold,” he says.

For those dispossessed of their past, the Armenia story is one that has yet to reach its ending.

A new discovery about women governors in Urartu

Mosaics of more than 1000-year-old church have been found in Mardin, Western Armenia

The mystery of the ancient city of Van is being revealed

Conference: The Treaty of Sevres and Centennial of Cilicia Independence